The Northern Snakehead: Coming to a Creek Near You?

Channa argus, commonly known as the Northern Snakehead, is an invasive fish that is native to parts of China, Korea, and Russia. They were first discovered in the wild in Maryland when one was infamously caught in a pond in Crofton, Maryland in 2002. This incident sparked a
nationwide media frenzy. Some were claiming this fish, with a head like a snake’s and a mouth full of sharp teeth, had the ability to walk on land, survive out of water for long periods of time, and even eat your pets. Some of those claims are partially true, but rest assured your pets are safe. In a separate incident, some individuals were released into the Potomac River and formed a breeding population there sometime around 2004. Since then, the Northern snakehead has expanded its range to every major tributary to the Chesapeake Bay. Last summer, South, West, and Rhode Riverkeeper Jesse Iliff found a large dead snakehead in Pocahontas Creek in the South River. I have personally observed adult fish in the headwaters of the South River in Davidsonville and in the tidal waters of Church Creek in Annapolis. Anecdotal reports from local anglers say the fish can be caught all over the South, West, and Rhode Rivers. Currently, the largest concentrations of the fish can be found in the Potomac and the rivers in and around Blackwater National Wildlife Refuge.

Despite their well-earned reputation in the Chesapeake watershed, snakeheads are fascinating fish worthy of admiration. It is true that snakeheads can live out of water for an extended period of time. Research indicates that as long as the fish stays moist, they can survive for several days on land. This is thanks to their ability to breathe air. Snakeheads, like many ancient fishes and a select few existing fish, can gulp and breathe air thanks to a labyrinth organ. This ability to breathe air allows snakeheads to survive in stagnant, oxygen-deficient waters like drainage ditches and floodplain pools. It is not true that the fish can “walk” on land, but they are known to squirm and wriggle along through shallow waters or if they are placed or leap onto land. Another interesting aspect of their lifecycle, and one which may contribute to their rapid spread, is their breeding habits. Snakeheads have been observed spawning multiple times per year, releasing up to 100,000 eggs each time. Once the eggs hatch the baby fish, or “fry” form a school that is aggressively guarded against predators by one or sometimes both snakehead parents!

What does this mean for our rivers? The snakeheads diet primarily consists of fish, but they are opportunistic feeders and will prey on nearly anything that passes by including insects, crustaceans, amphibians, and even small birds and rodents. This is bad news for our native fauna. Being a top-tier predator, the snakehead is feeding on smaller fishes such as white perch, yellow perch, and sunfish. These are important food sources for our native top predators such as chain pickerel and striped bass.

What can you do? Go fishing! Snakeheads prefer shallow, slow moving waters with a lot of structure and aquatic vegetation. You should target these areas but they can be caught in open water. Fishing from a dock or paddling to the upper reaches of your local creek is the best bet. If you’re already an angler, there’s probably no need for you to buy new lures, as snakeheads are not picky eaters and will likely go after any lure you have in your tackle box. Snakeheads are most frequently and effectively targeted with crankbaits, spinnerbaits, and top-water lures. That said, you may need to upgrade your tackle. Snakeheads are frequently caught at 30 inches in length and 15+ pounds, and are ferocious fighters once hooked. A medium or medium-heavy rod with 15 to 20 pound test line will handle most fish. Step up to 30 pound test if you fish in dense vegetation and waters that have a lot of snags. Many anglers who target larger fish use 50 pound test for good measure. Head to your local tackle shop and tell them you are after snakeheads and they will be happy to get you set up. 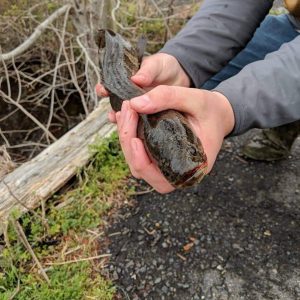 If you do catch a snakehead, DNR prefers that you harvest it. Snakeheads are well known for their white, flaky meat and mild taste, which is frequently compared to that of striped bass. It is legal to release a snakehead that you catch provided that you release it at the site of the catch. Transport of a live snakehead is illegal and can result in steep fines. If you see or catch a snakehead in one of our rivers, be sure to report it to the Maryland Department of Natural Resources and your Riverkeeper.